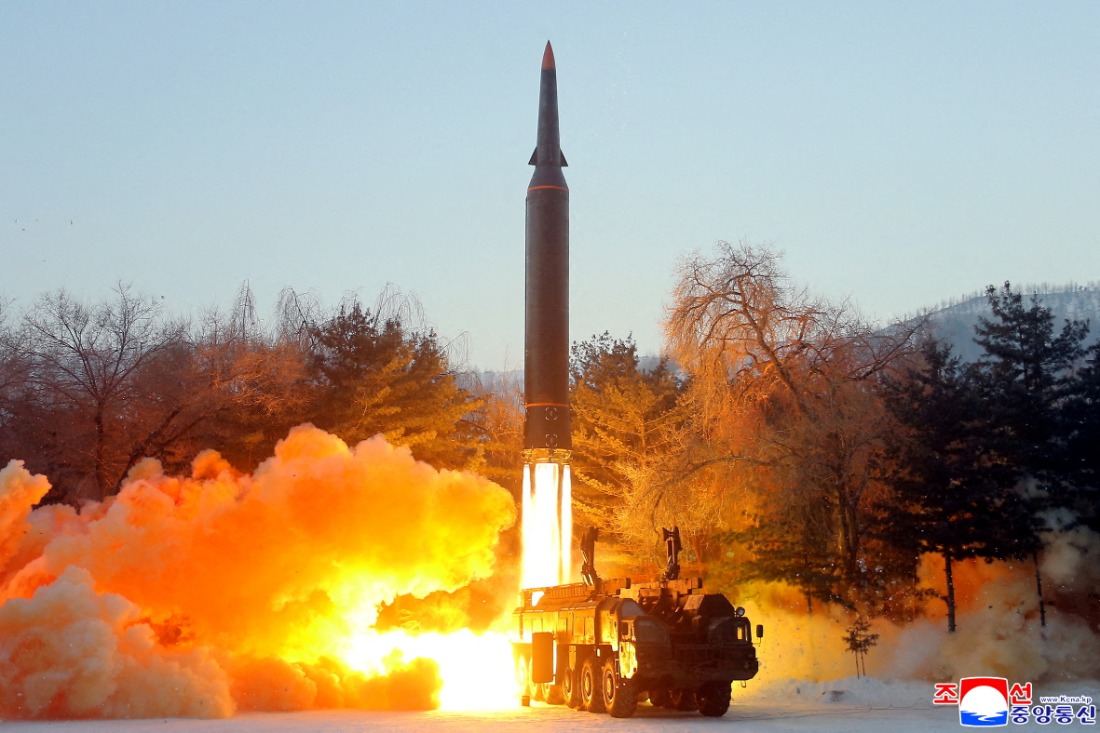 What North Korea’s Missile Tests Mean for the Korean Peninsula

Since Jan. 5, in the space of less than a month, North Korea has launched missiles, including “hypersonic missiles” and medium-range ballistic missiles, on seven separate days. Last September, it also tested missiles for five days. Thus, it is not the first time that Pyongyang has tested missiles for several days over the past year. However, this year’s launches are linked to the rapid cooling of relations with the United States, and this is what differentiates them from those of last September.

North Korea first tested hypersonic missiles last September in Chagang province. He followed that test with another on January 5, launching a hypersonic missile from an inland location in the East Sea (Sea of ​​Japan). Following this, on January 6, North Korea revealed through its Rodong Sinmoun newspaper that Kim Jong-un was very satisfied with the results and sent “warm congratulations” to the scientific research sector of the national defense.

Additionally, on January 11, Pyongyang again tested a hypersonic missile, launching a projectile from Chagang Province into the East Sea (Sea of ​​Japan). The South Korean Ministry of National Defense said the missile launched on January 5 reached a top speed of Mach 6, an apogee of less than 50 km, and flew less than 700 km, while the missile launched on January 11 January had flown more than 700 km, had reached an apogee of about 60 km, and was flying at a speed of about Mach 10. On January 7, a South Korean Ministry of Defense official qualified the launch of the 5 January of “just a normal missile that they exaggerated the capabilities of,” was the missile that Kim had publicly praised. As a form of retaliation, the North then tested another missile with more advanced capabilities.

Kim hailed the development of the hypersonic missile on Jan. 11 as “a big breakthrough.” However, there was a lot of skepticism about North Korea’s claims in the South. Professor Chang Yeong-geun of South Korea Aerospace University said: “It is unlikely that this missile system will be reliable enough to be combat-ready after three test flights.” Wang Ya’nan, editor of Mainland Chinese Magazine Aerospace knowledge told the Chinese government newspaper the world times: “terminal guidance is the most difficult technology to make the weapon useful… It requires a very complex and coordinated work of sensors, hypersonic flight control and probably also data transfer from satellites, drones and large reconnaissance aircraft to guide the weapon to its target.”

Hypersonic missiles are more difficult to integrate than conventional missiles and have been dubbed “game changers”. But this is an exaggeration. The United States and South Korea possess the ability to precisely target and strike Kim’s office and his many mansions. Therefore, even if the North succeeds in developing a hypersonic missile capability, unless Kim is crazy, he will not use it to launch a preemptive strike on the South. Therefore, these new missiles will not improve the North’s security vulnerabilities or weaken the security situation of South Korea in particular. That said, the only countries that currently have hypersonic missile capability are the United States, China, and Russia. Therefore, if North Korea has indeed “passed” these tests, then it will be an even stronger source of pride and loyalty among its people, and will further strengthen Kim’s authority.

This year, North Korea has two significant anniversaries on February 16 (Kim Jong-il’s 80th birthday) and April 15 (Kim Il-sung’s 110th birthday), which authorities describe as a “great revolutionary occasion of celebration”. . Kim Jong-un’s legitimacy as a leader is rooted in his being Kim Il-sung’s grandson and Kim Jong-il’s son. Thus, he must mark these two political anniversaries with the required pomp and circumstance. The claimed “big breakthrough” with hypersonic missile technology is designed to show that the country is capable of real success, at least in the national defense sector. It would seem that the need to create a festive atmosphere in time for Kim Il-sung’s April birthday is a major motivation.

North Korea’s claims prompted additional and severe unilateral sanctions from the United States. On January 12, the US Treasury Department’s Office of Foreign Asset Control (OFAC) unveiled sanctions targeting six North Koreans and a Russian national, as well as a Russian organization, which it accuses of participating in weapons of destruction North Korean Massive Massive Weapons (WMD) and ballistic missile programs.

In response, a North Korean Foreign Ministry spokesperson attacked the United States, saying, “If the United States defiantly adopts such a confrontational stance, the DPRK can only show its stronger reaction and Claire. The North said that although it had not tested an intercontinental ballistic missile (ICBM) capable of striking the American continent, if the United States insisted on responding with sanctions, it would follow up with another show of force.

The Jan. 17 missile test took place during South Korean President Moon Jae-in’s visit to Middle Eastern countries that are major export markets for North Korean weapons and military technology. At the time the test took place, Moon was visiting the United Arab Emirates (UAE), where he had signed deals worth around $3.5 billion to export the South Korean weapons system. KM-SAM (Cheongung-Ⅱ), a surface-to-air ballistic missile interceptor system. The North Koreans were thought to have tested a ballistic missile at that time to show their “accuracy, stability and operational efficiency” to countries in the Middle East.

Towards a hard line in American relations

On January 19, Kim Jong-un convened the sixth session of the Politburo of the Eighth Central Committee (CC) of the Workers’ Party of Korea. The United States has been accused of denying North Korea’s rights to “exercise its sovereignty” and the sanctions imposed by the US government on January 12 following the two “hypersonic missile” tests have been strongly condemned. In addition, he “instructed a concerned sector to comprehensively reconsider the confidence-building measures we have taken on our own initiative on preferential ground and to promptly consider the issue of restarting all temporarily suspended activities.” Thus, the Politburo signaled that it would completely reconsider the decisions taken during the CC plenary session in June 2018. In April 2018, the third plenary meeting of the Seventh CC announced the suspension of nuclear tests, ballistic missile tests medium and intercontinental, and the closure of the Punggye-ri nuclear test facility. Thus, Kim’s directive at the recent Politburo session can logically be interpreted as an order to reconsider the resumption of nuclear testing, ICBM testing, and even the restoration of the country’s closed nuclear test facilities.

The United States had planned to convene a meeting of the United Nations Security Council (UNSC) on January 20 to confirm that the tests since last September had violated UNSC resolutions regarding North Korean missile tests, and to adopt additional sanctions targeting the North. So Kim summoned the Politburo ahead of this scheduled UNSC session to send the message that if the UNSC passed new sanctions, the North would respond aggressively with nuclear and ICBM tests. However, China and Russia have indicated they want to delay US proposals to sanction others linked to North Korea’s ballistic missile program. Thus, the sanctions were not adopted and the North no longer had any reason to react aggressively.

Under such circumstances, the North had much more to lose than to gain by restarting nuclear and ICBM testing, so it seems unlikely that they would nevertheless proceed with such a foolish decision. Already in 2017, following nuclear and missile tests, the North declared its “full nuclear potential”, and therefore further tests are unlikely to give it real additional bargaining power in negotiations with states. -United.

China fears that if the North continues to develop its nuclear capabilities, South Korea, Japan and even Taiwan will start developing their own nuclear capabilities, and that the United States will agree to such measures in order to contain China. Therefore, while China is happy to comply with North Korea’s non-nuclear tests, it is forced to participate in UNSC sanctions that target North Korean nuclear and ICBM tests.

Perspectives for the Peninsula

North Korea again tested long-range cruise missiles twice on the morning of January 25, and on January 27 it tested two surface-to-surface tactically guided warheads in the Hamhung area. In addition, on January 30, the North tested the Hwasong-12, a medium-range ballistic missile capable of hitting Guam, and hinted that if additional US sanctions were imposed on Pyongyang, it would potentially conduct missile tests. ICBMs.