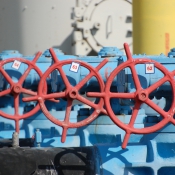 Once the drilling program is completed, the data obtained should allow the company to convert part of the 5.96 trillion feet certified independently3 gross potential resource into a first contingent resource for the Nariin Sukhait region as of 2H 2022, TMK said.

The project covers an area of ​​8,400 km2 and is located approximately 20 km from the Sino-Mongolian border and close to the gas transmission and distribution network in northern China.

TMK last month completed the acquisition of Telmen Energy, which held a 100% stake in the Gurvantes XXXV project.