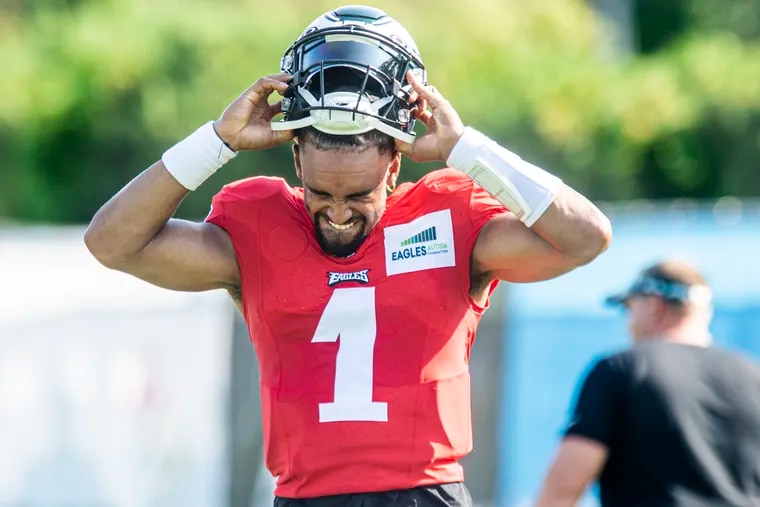 Between Thursday’s practice periods, which lasted nearly two hours – marking the longest training camp session so far – Eagles players and coaches huddled around waterholes spread over the grounds of the NovaCare complex. With the heat index hovering around 100 degrees, they took turns spraying each other with water and taking sips of much-needed hydration.

As for other precautions to take against the intense elements?

“You grab a towel and wipe yourself down,” said tight end Jack Stoll, “the next thing you know five seconds later you have to do the same thing again!”

It was that kind of scorching day for the Eagles as they worked in the scorching sun. Coach Nick Sirianni even moved the start of training forward – from 10 a.m. to 9 a.m. – in an attempt to beat the warmer temperatures that arrived at noon.

For the majority of the session, the intensity level seemed high, although the players were clearly gassed in the final 20 minutes.

“We don’t have to play [Friday], so of course you watch that, and the guys got tired in the last period, there’s no doubt about that,” Sirianni said. “But we throw different conditioning things at them, in addition to our daily games. I can say that we are improving a little every day with our conditioning.

“It’s pretty typical in two minutes – guys are going to tire and their fundamental and footballing IQ will suffer. We have to fight through these things. But the intensity was high. I’m glad it happened here because it’s going to be a great opportunity for us to teach from there.

“These guys are in better shape. Most of them [arrived] in great shape, ready for that mountain we have to climb.

Thursday’s practice was the sixth of training camp, which began July 27. The Eagles still have a week of practice before their first preseason game, scheduled for Aug. 12 against the Jets at Lincoln Financial Field. The Eagles’ practice times were lighter, ranging between 50 minutes and 1 hour and 20 minutes, meaning Thursday was the longest session by any metric.

Here are the rest of the players who were hit by injuries in week one:

Tight ends Tyree Jackson and Richard Rodgers and offensive lineman Brett Toth started training camp on the roster physically unable to perform. Rodgers was activated on Wednesday, while Jackson and Toth remain on the PUP.

For some of the more established players who ran out of time, such as Cox, Kelce and even Smith, the break might not affect them as much compared to a player fighting for a roster spot with less security.

“I feel like I’m in good shape,” rookie linebacker Kyron Johnson said. “Those are the types of practices where, yes, it’s going to be exhausting and tiring. But you have to fight. Because to get something you’ve never had, you have to do something you’ve never done. It’s fight and work until you pass out, really. I like to practice in the heat because I’m used to it.

“There’s nothing a little cold water can do.”

During Sirianni’s first season, he made it clear how much he values ​​practice time. Sirianni has also expertly balanced the fine line between training intensity and prioritizing player health; the Eagles have rolled out a relatively healthy roster throughout the 2021 season. Sirianni said practices — especially joint practices — carry as much weight as actual preseason games when it comes to evaluation and scoring. player self-assessment.

After the preseason opener, the Eagles will travel to Cleveland and Miami in back-to-back weeks, and they’ll hold joint workouts with the Browns and Dolphins.

“I think we feel good – when you add another element like heat, that’s what training camp is for,” Stoll said. “God knows, some of these games in September get really hot. So it’s good to come here and do this work. It was not up to our expectations when we got to the end [of practice]but that’s what camp is for, and we’re going to keep improving.

Shelf Drilling: Approval and Publication of the Admission Prospectus