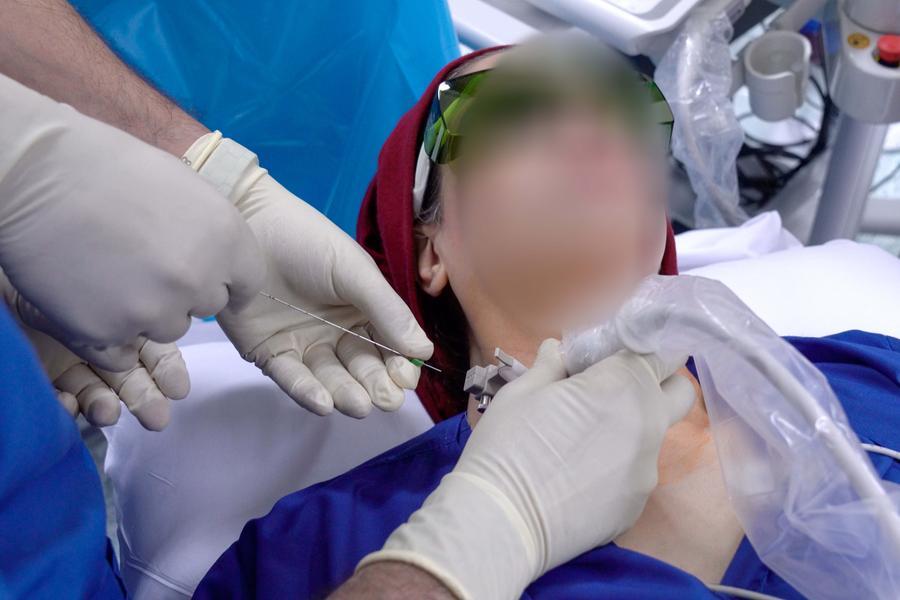 Palpable thyroid nodules occur in about 4-7% of the population (10-18 million people). A thyroid nodule is a palpable swelling of the thyroid gland with an otherwise normal appearance. They are common and can be caused by various thyroid disorders. Although most are benign, about 5% of all palpable nodules are cancerous. Nodules are evaluated for thyroid cancer with a biopsy, and those containing cancer or suspected of cancer are removed with surgery. Benign nodules are usually not removed unless they grow over time or cause symptoms such as difficulty swallowing or choking.

Rula had three nodules on the right of her thyroid gland and three on the left. She had followed to the ENT department every six months for observation, ultrasound and other tests to monitor the size of the nodules. However, during his last follow-up, doctors noticed an enlargement of one of the nodules and the ENT surgeon suggested laser removal.

Laser ablation is a procedure to reduce the size of benign thyroid nodules that are symptomatic. This may cause difficulty breathing, swallowing, neck discomfort, or foreign body sensation, or the procedure may be done for cosmetic reasons.

Elaborating on the procedure, Dr Shaik Irfan Basha, Consultant in Ear, Nose and Throat and Head and Neck Surgery, and Chairman of the Department of Surgery, SKMC, said: “This technique is performed while the patient is conscious , under local anesthesia. A fine needle, less than 1 millimeter in diameter, is inserted into the target thyroid nodule under ultrasound guidance. Laser treatments are performed through the needle, and the amount of energy delivered is planned and pre-calculated based on the size of the nodule. Patients recover within two hours and are discharged the same day without the need for further medication. They can return to work and other activities the next day and are assessed immediately after the procedure, one month after, and again at 12 months.

Speaking in more detail about the procedure, Dr. Shaik Irfan Basha said, “Laser ablation therapy for benign thyroid nodules is a relatively new non-surgical procedure that is effective, reproducible, generally well tolerated and has a very low risk of major complications. Our thyroid is a vital organ that regulates metabolism, growth and development. Laser ablation allows us to preserve the organ.

Ideal candidates for this procedure are thyroid patients who have:

Additionally, the procedure may also be ideal for some patients who refuse to undergo partial or complete surgical removal of the thyroid gland for the sake of long-term consumption of levothyroxine which cannot completely replace the function of the thyroid gland.

The patient said, “I was thrilled when Dr. Basha informed me that I would be the first SKMC candidate to have the nodules laser removed. I was relieved that I didn’t have to have surgery or have my thyroid gland removed. Now I no longer need medication and I have no scars on my neck. I am really grateful to the doctors and the whole team at SKMC.”

To learn more about SKMC’s surgical and ENT capabilities, please call 800 50 or visit www.seha.ae/. You can also make an appointment via the SEHA Mobile app or WhatsApp at 02-4102200.

Abu Dhabi Health Services Company PJSC – SEHA – is an independent public limited company established to develop the curative activities of the public health system in Abu Dhabi. The company owns and operates all public hospitals and clinics in the Emirate of Abu Dhabi.

SEHA is part of ADQ, one of the largest holding companies in the region with a broad portfolio of major businesses spanning key sectors of Abu Dhabi’s diverse economy.

SEHA is committed to continuously improving customer service in accordance with recognized international standards and to providing the community with world-class healthcare. SEHA operates 14 hospitals with over 3,385 beds, 70 outpatient, family care and urgent care centers and 3 blood banks. Its facilities see 117,162 inpatients each year and perform 43,262 surgeries, as well as treating more than five million outpatients.

SEHA is one of the largest integrated healthcare providers in the Middle East with over 14,000 doctors, nurses, auxiliary care staff and administrative staff. Learn more at www.seha.ae