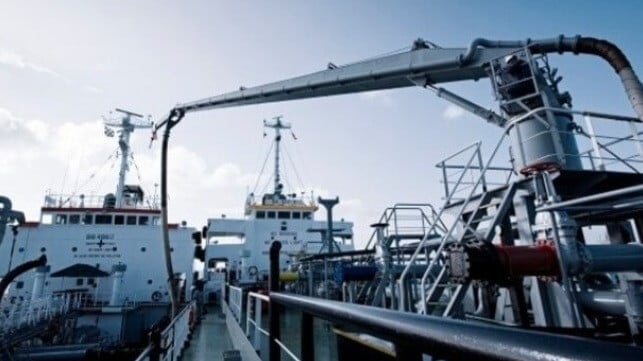 The Singapore Maritime and Ports Authority has concluded its investigation into the 2022 fuel contamination incident which affected more than 200 ships that refueled in the world’s largest bunker market. While finding no evidence that the suppliers intentionally contaminated the HSFO sold to the ships, they concluded that one of the suppliers, Glencore Singapore, continued to supply the contaminated fuel after tests revealed the contamination. As a result, the MPA is taking action against Glencore by suspending its bunker license for two months.

“Glencore breached the terms and conditions of its bunker license by failing to ensure that any bunker supplied by it was free from contamination,” the MPA said in its final report detailing the investigation. They found that a total of 24 vessels had been supplied with the affected fuel by Glencore between 22 March and 1 April 2022, with at least three vessels reporting issues with their fuel pumps and engines.

Concerns about a potential fuel contamination issue started to surface in early March after the ships began to experience failures in their auxiliary engine fuel system, which resulted in a loss of power and propulsion. Veritas Petroleum Fuel Testing and Inspection Laboratory issued a warning on March 11 about a potential problem warning vessels to undertake further confirmatory testing. The MPA reports that it was informed on March 14 that a number of ships had been supplied with contaminated fuel and VPS, and another fuel testing organization, Maritec, issued additional warnings as well as Lloyd’s Register FOBAS alerts to ship owners and operators. end of March.

During its investigation, the MPA discovered that Glencore Singapore had engaged a fuel oil analysis laboratory and were informed between March 21 and 23 that the results showed contamination. The samples taken from fuel oil sold by Glencore contained concentrations of COCs (chlorinated organic compounds) rarely found in bunker fuel oil. The MPA reports that despite being made aware of the high levels of the contaminant, Glencore continued to supply bunkers mixed with the contaminated fuel for a further 10 days until April 1.

The MPA will suspend Glencore’s bunker license effective August 18, 2022. of, or reasonably suspects, any irregularity in fuel quality. ”

The investigation used sophisticated forensic fingerprint analysis of the fuel samples. As a result, the MPA was able to trace the fuel back to supplies from Glencore and PetroChina International (Singapore) and follow the trail to a single load of fuel. They determined that the contaminated fuel had traveled on a tanker from the port of Khor Fakkan in the United Arab Emirates.

While PetroChina had also supplied the contaminated fuel to ships in Singapore, the investigation determined that PetroChina had stopped supplying the fuel as early as March 19. Since the company had taken prompt action after receiving the test results, the MPA is not taking any action against PetroChina. .

The contaminant found in the recent incident, however, cannot be detected by standard ISO and ASTM procedures. Glencore had tested the fuel and found it to meet ISO standards. Testing labs used additional methods to ultimately confirm the elevated levels of chlorinated hydrocarbons. At the time, VPS indicated that it estimated that 140,170 metric tons of the fuel had been contaminated worth $120 million.

With the fuel market in Singapore selling around 50 million tonnes a year, the MPA is using this incident to remind all licensed bunker suppliers to strictly adhere to the terms and conditions of their licenses. They maintain fuel quality assurance measures for the market, stating that more than 1,300 samples are tested each year. The MPA is also working to strengthen its fuel quality controls.