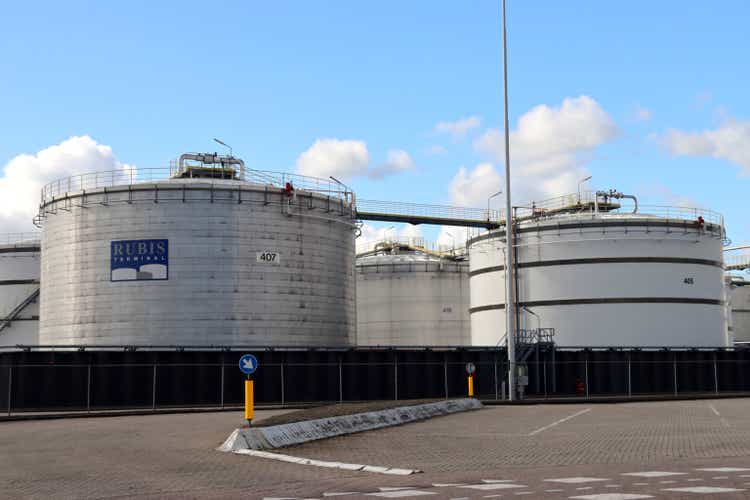 As it’s been years since I last took a look at Rubis (OTCPK:RBSFY), I think it’s time to get another good look at this company as its stock price has continued to drop, now trading around 40% lower than when my previous article was published. As Rubis is still part of the Nest Egg portfolio (you can read the most recent issue here), I have to keep an eye on this Paris-listed energy distributor. Although it is a French company, it only generated 17% of its turnover in Europe in 2020, so it should be seen as a vehicle to gain exposure to the Caribbean market and Africa.

Rubis has its main listing on Euronext Paris where it trades with RUI as a stock symbol. The average daily volume in Paris is just over 250,000 shares for a monetary value of around EUR 8m per day. This clearly makes the Paris listing the most liquid listing for trading the company’s shares.

The oil business is not dying

As you can see in the chart above, Ruby has been a disappointment for almost every investor over the past five years. After the first drop linked to the COVID pandemic at the end of the first quarter of 2020, Rubis saw its share price fall below the EUR 30 mark before regaining some of the lost ground. Unfortunately, the rebound to EUR40/share was short-lived and here we are again, below EUR30.

The market seems to think the oil industry is an endangered species. While it’s easy to understand that new power sources are on the rise, keep in mind that Rubis operates in developing regions, which means ICE engines are likely to remain very important. Moreover, the bitumen sector could also be seen as a purchase option for developing countries, as more and more African dirt roads will receive a nice layer of asphalt. So I would like to say that Rubis has a lot of potential. Not only because the stock is now trading at a low valuation, but also because Rubis is using its free cash flow earnings to expand into other sectors.

The company will not release its financial results until March, so I will have to rely on the detailed financial statements for the first half of 2021, in combination with the last business update published by Rubis after the end of the third quarter.

Looking at the results for the first half of 2021, we indeed see how the increase in EBITDA translates into a nice improvement in both EBIT and net income since Rubis declared a net income of 136.2 M EUR, which represents EPS of EUR 1.33 per share. This is important because it only includes 1.25 million euros of contributions from the Rubis Terminal joint venture (which was previously wholly owned). On a like-for-like basis and excluding non-recurring items, net income rose by approximately 33% in the first half.

Of course, that was only the first half of 2021. Rubis also provided an interim update after the end of the third quarter and there we see that the total revenue has increased by about 30% in the third quarter. This is obviously also due to higher oil and petroleum product prices, so revenue growth by itself may not be significant and unfortunately the company has not provided an update on its margins. EBITDA and EBIT in the third quarter.

So while earnings are moving in the right direction, the jury is still out on the margins and I think this is one of the main reasons why the share price is still trading below 30 EUR/share .

Rubis being a service provider with a fairly significant exposure to infrastructure (a terminal, a refinery, etc.), it is also important to look at cash flows. And more specifically, the maintenance of free cash flow.

I come back to the detailed financial results of the company for the first half. As you can see below, Rubis generated 280M EUR of operating cash flow but you still have to deduct taxes due (32M EUR) and rents (21M EUR) and interest payments (9.5M EUR) . And for completeness, I also deduct the €10.5 million payments to non-controlling interests. The cash flow statement below only shows the financing cash flow to explain where the lease and interest payments come from.

Thus, after deducting these €280 million items as shown below, adjusted operating cash flow was approximately €207 million.

We see that the total capex was around €90 million, resulting in a free cash flow result of €117 million. That’s about 15% less than the reported net profit, but it actually provides a great example of why it’s important to separate growth investments from maintenance investments. In recent years, only around 60% of investment spending for the year as a whole has actually been used to support investment spending.

This actually means that sustainable free cash flow will likely be quite close to or even higher than the reported EPS of EUR 1.33 per share, and the lower free cash flow could be explained by growth investments.

Rubis is using its strong cash flow for a share buyback program, but it has also created a new division: Rubis Renewables. As mentioned earlier, Rubis puts its euros generated in oil-related divisions to work in different sectors to diversify away from being a pure oil-related player.

Ruby bought a 80% stake in Photosol Francea large Independent Renewable Power Producer with 313 MW of operational capacity with an additional 101 MW under construction.

It’s certainly not a cheap deal as Rubis pays €376m in cash and assesses the enterprise value of the business at €770m. That’s quite rich considering the expected contribution to EBITDA is only €35m, but Photosol is also one of the strongest growers as EBITDA is expected to grow at a CAGR of 40% at over the next four years, which means that Rubis’ attributable EBITDA could in fact reach 100 million euros in 2026. And at this rate of growth, the consideration for the acquisition is reasonable – but it all depends on the good execution of this new division within Rubis. In addition, Rubis could deploy Photosol’s know-how in its main regions of Africa and the Caribbean, so there are synergy advantages through which Photosol could expand into other regions, using the existing network of Ruby.

The acquisition of Photosol could be a game-changer for Rubis, although the company will have to show that this agreement can live up to expectations. Rubis currently has a market capitalization of just under €3 billion and, including the Photosol deal, I expect the company’s net debt to increase to around €1.15 billion. . With an EBITDA of 240 million euros (excluding lease amortization) in the first half of 2021 and a full year EBITDA expectation (my expectations) of more than 500 million euros for this year, the balance sheet can easily manage the acquisition.

I think EPS will increase to around EUR 2.80-3.00 per share this year and as Rubis is aiming for a 60% payout ratio, the dividend will likely continue to be around EUR 1.75-1.80 per share. share for a dividend yield of approximately 6% based on the current share price. Dividend tax in France for foreigners can be reduced to 12.8% by proving that you are not a French resident.

I currently do not hold a position at Rubis but I appreciate the shift from “old energy” to renewable energy as the company seeks to increase the current capacity of its renewable division by 8 times by 2030.