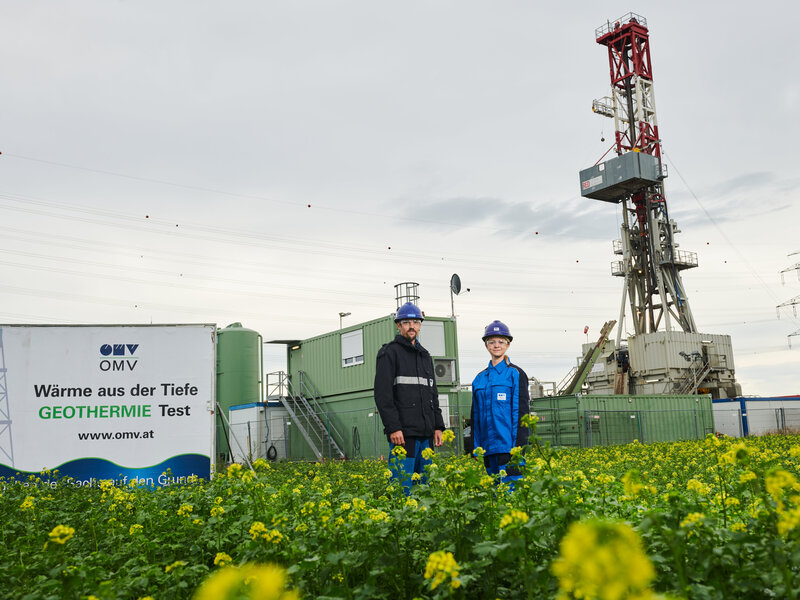 In its Strategy 2030, OMV, the integrated international oil, gas and chemicals company headquartered in Vienna, has set itself the goal of expanding its low-carbon business and thus its low-carbon energy portfolio. . In the geothermal sector, OMV sees its strength in its vast expertise as well as its surface and underground experience, its existing reservoirs and infrastructure, and the strong market growth in Europe. OMV’s power generation from geothermal energy is expected to reach 9 TWh by 2030.

Among other projects, OMV is working on two geothermal development projects: one in Austria and one in Germany, where OMV is cooperating with a partner.

In Austria, OMV is conducting a production test to analyze the geothermal potential of the Vienna Basin. In terms of geology, the test takes place in the basement of the Vienna Basin, in the “Hauptdolomit”. A workover will prepare the OMV Aderklaa 96 well for testing at a depth of approximately 2,800m. Formation water (i.e. the water contained in the pores of the rock) is produced, temporarily stored above ground in sealed containers and then reinjected into the formation. The purpose of the production test is to determine the important parameters of the reservoir and to obtain samples of the water from the formation in order to decide whether this formation is suitable for producing geothermal energy.

In Germany, OMV holds a 50% stake in a geothermal exploration project, called Thermo, in Lower Saxony. It is a small aircraft taking gravimetric and magnetic measurements over an area of ​​approximately 5,000 km² to collect geological information. This information will be used to assess geothermal energy potential and will form part of a comprehensive assessment of future geothermal activities in the area. OMV’s partner in this project is ZeroGeo Energy GmbH (50%).

According to OMV experts, the geothermal conditions in the Vienna Basin are suitable for use as a direct heat carrier. In northern Germany, geothermal energy could be used to generate electricity.

OMV Aktiengesellschaft
With a Group turnover of 36 billion euros and a workforce of approximately 22,400 employees in 2021, OMV is one of the largest listed industrial companies in Austria.
In chemicals and materials, OMV, through its subsidiary Borealis, is one of the world’s leading providers of advanced and circular polyolefin solutions and a European market leader in basic chemicals, fertilizers and plastics recycling. With its two main joint ventures – Borouge (with ADNOC, in the United Arab Emirates and Singapore) and Baystar™ (with TotalEnergies, in the United States) – Borealis provides products and services to customers around the world. OMV’s Refining & Marketing business produces and markets fuels as well as raw materials for the chemical industry, operates three refineries in Europe and holds a 15% stake in a refining joint venture in the United Arab Emirates. OMV operates approximately 1,800 service stations in ten European countries. Additionally, the business includes Gas & Power Eastern Europe where it also operates a gas-fired power plant in Romania. In exploration and production, OMV explores and produces oil and gas in the four core regions of Central and Eastern Europe, the Middle East and Africa, the North Sea and Asia-Pacific. . Average daily production in 2021 included production from a joint venture in Russia and was 486,000 boe/d with a focus on natural gas (~60%). As of March 1, 2022, Russian entities are no longer consolidated. Its activities include Gas Marketing Western Europe, where it also operates gas storage facilities in Austria and Germany.
OMV intends to grow from an integrated oil, gas and chemical company to a leading supplier of innovative and sustainable fuels, chemicals and materials, while playing a leading global role in the circular economy. By shifting to a low-carbon business, OMV is striving to reach net zero in all three perimeters by 2050 at the latest.

ZeroGeo Energy GmbH
ZeroGeo Energy GmbH, a Swiss company, is the operator and developer of geothermal energy projects in Europe.
The Company is committed to contributing to the energy transition by providing low-carbon, baseload geothermal energy on an industrial scale by deploying next-generation geothermal energy technologies combined with leading expertise in implementation and financing of energy projects.
The company is developing projects that will achieve this – providing an “always-on” basic green power that the company calls GeoPower.
The company is led by an experienced board and management team and the company will leverage its expertise and experience in capital-intensive oil and gas projects, create synergies with our strategic partners and deploy the latest developments in next-generation geothermal energy technologies.
GeoPower’s greenhouse gas emissions will be certified in accordance with greenhouse gas protocols and our environmental, social and governance (ESG) policies are fully aligned with the United Nations Sustainable Development Goals.
To learn more, visit https://www.zerogeo.energy/