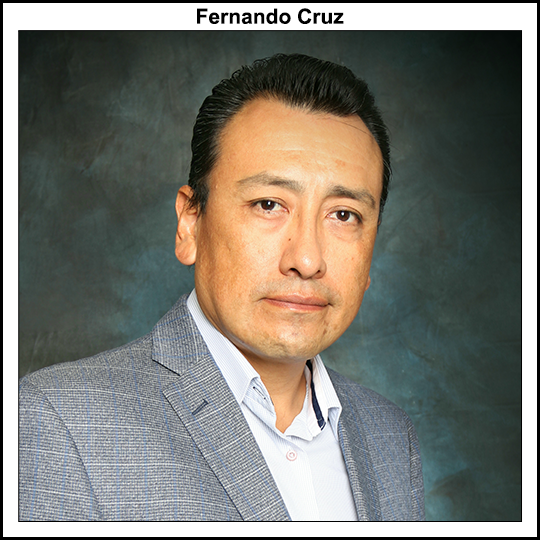 Cruz added, “I think we have to understand that energy security is more important than sovereignty. And as we know, energy security first involves having constant and secure sources of energy, so that there is enough supply available to meet demand.

Since 2021, Cruz has been the Mexican director of Dolphin Drilling, an industry leader in semi-submersible rigs, located in Ciudad del Carmen. A seasoned expert in the energy and oil and gas industry, Cruz previously served as country manager for Mexico at Fugro, a leading geodata specialist, from 2018 to 2020, and was also CFO of the company from 2006 to 2018. Prior to working at Fugro, Cruz was an audit manager and supervisor at KPMG and Deloitte.

Cruz is a graduate of the Instituto Politécnico Nacional, where he studied finance and accounting.

NGI: For readers unfamiliar with Dolphin Drilling, can you tell us about the company’s work in Mexico and your role as director?

Cruz: Dolphin Drilling is an Anglo-Norwegian company that has been active in the energy sector for over 50 years. The company’s core business is the operation of semi-submersible platforms. Dolphin Drilling is an industry leader in these types of rigs, especially in harsh environments like the North Sea, where the company has developed great expertise with these types of rigs. We have projects all over the world, from Norway to the UK to Brazil. We recently completed a project with Petróleos Mexicanos (Pemex) here in Mexico, and we will now be operating in Nigeria. We operate our own platforms, and we also take control or assume the operations of certain platforms owned by third parties.

And in my role, part of what I’m currently doing in Mexico, given that we just finished the contract that we had with Pemex, is we are now exploring options in the market to maintain our presence in Mexico. We do this by assisting and assisting companies that probably have semi-submersible rigs and don’t have the expertise that we have. We are able to help them operate the platform with the standards of efficiency that we use in the operations of our own platforms around the world. And currently, in my role, I’m looking to expand our operations in Mexico so that we stay here for an extended period of time. We were in Mexico in 2008 and had a project with Pemex, then we left Mexico, then came back in 2019 to work on another project with Pemex. Mexico is a very attractive market and I’m looking to find alternatives and opportunities so that we stay here long term and don’t have to leave Mexico anymore.

NGI: Was Pemex’s late payments to service providers a problem?

Cruz: Yes. Also, with the current high oil prices, there is more demand for our important assets in markets like the North Sea or in Africa, where they offer rates that are sometimes double what Pemex pays. So if you add that factor on top of late payments, it really puts Pemex at a disadvantage.

NGI: And so currently Dolphin Drilling is looking for new clients in Mexico?

Cruz: We currently have projects underway, although we are looking to secure larger deals to establish ourselves in Mexico for the long term. We are still in the early stages of certain commercial transactions and we intend, during the last quarter of the year, to consolidate certain transactions and reorganize our operations in order to establish a solid base in Mexico.

NGI: Dolphin Drilling’s operations are based in Ciudad del Carmen, which has always been one of the most important oil and gas towns in Mexico. What is the current state of the oil and gas market in the city and how is the labor market in the energy sector doing?

Cruz: Ever since the price of oil plummeted a few years ago, before the pandemic, the city had been experiencing a downturn in terms of the business environment. Many companies began to have infrastructure problems, especially in terms of communications, the reliability of communication services, utilities, medical services and in particular the decline in air travel and flight offers to the town. When the pandemic started, there was an even more dramatic drop in oil prices. At the same time, at the start of this administration, there was a lot of expectation in the city, and the government at one point even called it “Mexican Galveston” and said there would be a lot of growth.

The reality, however – and this was partly due to the pandemic – is that many major oil companies have started looking for new locations to set up shop. Eni, for example, which had a major operating office in Ciudad del Carmen, closed its offices here and moved to Villahermosa, Tabasco. They have since opened their operations office in Villahermosa and their logistics offices in Dos Bocas, Veracruz.

Also Fieldwood Energy, which had a logistics base here in Ciudad del Carmen, also began to scale back its operations, then later sold its stake in an oil block in Mexico. Other large companies such as Schlumberger and Halliburton, at the start of the pandemic, changed their models to accommodate more working from home, which also led to the closure of offices in Ciudad del Carmen. So now that there is more activity in the oil industry again, the same number of people have not returned to work. The truth is that we have seen a sort of migration away from Ciudad del Carmen.

NGI: You mention a lack of air connectivity to the city. Have the airlines reduced their flights to Ciudad del Carmen?

Cruz: A few moments ago, I was talking to the manager of a major infrastructure and construction company in the energy sector, and we were talking about the complexity of traveling to and from Ciudad del Carmen. There was a conference here this week and, if you want to get here from Houston, for example, there are no more direct flights from Ciudad del Carmen, although there were two daily flights offered by United Airlines.

This is no longer the case. So if you want to come to Houston to do business in Ciudad del Carmen, it now takes almost a whole day to get here and you have to go through Mexico City. Visits that used to last only one day now take three days. This lack of connectivity has also limited the city’s ability to recover from the pandemic.

Additionally, Pemex continues to be the dominant company in town and, as we know, the company has significantly reduced its offshore exploration and production capital budget and focused more on development this year. onshore in the state of Tabasco. It has also resulted in reduced activity here, as the city works closely with Pemex in terms of logistics, support and services.

NGI: You recently wrote a column about the sustainability risks currently in the Mexican energy industry and I wanted to ask you: what do you think Mexico could do to have a more sustainable energy sector?

Cruz: I think the basis of sustainability is rooted in energy policy. And, as we know, Mexico’s energy policy is currently going in the opposite direction and away from the energy transition that is happening in other parts of the world, like Europe, which is years ahead of us, as well as the United States, which is also a few steps ahead. So I think the Mexican government needs to recognize the reality of the energy transition. And what is this reality? That there is no other option and that we must adapt our energy policy if we want to continue to be a competitive country.

I think that, first of all, we have to be more open to discuss the best energy policy to serve Mexico. I think we have to stop discussing topics that do not add value to the conversation, such as the subject of sovereignty.

There is a lot of confusion in this administration between the concept of sovereignty and the concept of energy security, which are two separate things. Being sovereign does not mean that the government must control everything in the sector and that it must be a major player in the market. On the contrary, the state acts to provide an adequate policy and regulatory framework to incentivize investment and promote energy development through a wide portfolio of offers in the country. I think we have to understand that energy security is more important than sovereignty. And as we know, energy security first involves having constant and secure sources of energy, so that there is sufficient supply available to meet demand.

NGI: A constant topic of discussion in the Mexican natural gas industry is the country’s growing reliance on US imports to meet local demand. What do you think of the future of the US-Mexico gas relationship?

Cruz: There are so many resources in Mexico that are still waiting to be explored and could be exploited, and gas in particular is a resource that has a lot of potential. Currently, Pemex, for example, devotes a large part of its budget to onshore drilling. They drill in fields such as Quesqui, which is almost all gas and where Pemex mainly does hydraulic fracturing. We know “fracking” is considered a dirty word these days in Mexico, but that’s what Pemex does.

At the same time, there are companies like Jaguar E&P that are doing very well in their exploration programs and much of what they produce is natural gas. So there are a lot of gas deposits to explore in the southeast and there is a considerable amount in the north. Proximity to the United States could be an advantage, and Mexico could take advantage of their expertise and try to recruit her for use here.

One way to do this would be to re-open the auctions, similar to those conducted under the previous administration. It is well known that natural gas is the transition fuel of the near future. As we move away from traditional fuels and replace them with renewables, gas is the transition fuel that will be needed and will continue to be very important in the global market. Mexico has significant reserves available, and in order to reduce its dependence on imports from the United States, it must seek ways to encourage investment in the sector here.