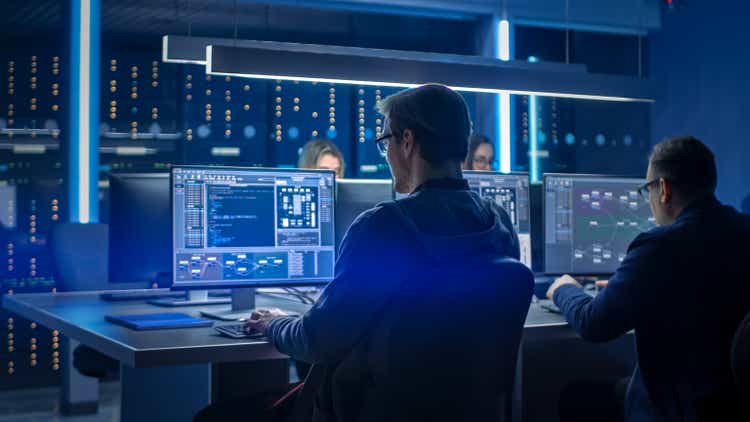 The following segment is taken from this fund letter.

Maximus is currently our largest position in the Focused SMID Cap strategy. Maximus manages health and social services programs on behalf of governments, primarily for state governments and the federal government in the United States, but also in some other countries. Maximus operates as a government contractor, administering entire programs or parts of programs for its government clients.

Examples of this work might include managing customer service call centers for Medicare, determining a citizen’s eligibility for Medicaid and enrolling that citizen in their state’s program, assisting to a federal agency in upgrading its computer systems or running job search programs for unemployed citizens, among many other things.

We initially had a modest position in the portfolio, as we saw Maximus as a solid company with steady growth prospects. Government customers continued to look for ways to improve their own operations and reduce costs by outsourcing programs and program components to partners such as Maximus. Maximus’ main competitor – and it’s the same for all of its peers – is the internal operations of their government clients. The Company’s ability to distribute its resources among multiple clients and share best practices among clients makes it an easy choice for government partners.

Our thinking about Maximus evolved rapidly at the start of the pandemic, which ultimately led us to make the action our biggest asset. From a shorter-term perspective, the company has used its capabilities and well-established position with government health service agencies to secure a significant amount of COVID-related work in 2020-21, including things like managing contact tracing or vaccine information hotlines. However, the longer-term implications of COVID for the company’s government customers – and therefore for Maximus – really caught our attention.

When COVID first hit in early 2020, the healthcare system was overwhelmed and lockdowns led to economic disruption, business closures and sudden unemployment. It quickly became apparent to us that much greater government support was going to be needed, both during and after the initial emergency. As Maximus primarily focuses on healthcare and social services, all of this presented a potential growth opportunity for the company. Rethinking public health care preparedness and crisis response was an obvious component of this, along with the administration of various longer-term stimulus-focused aid programs.

When the industry suddenly had to change, Maximus was able to demonstrate its capabilities during a major crisis, and we believe this allowed it to further integrate with existing customers and expose it to new customers as well, allowing the business to take advantage of new opportunities as they arise in the post-COVID world. We see clear evidence of this in the company’s organic teen revenue growth forecast for this fiscal year, which is well above the mid-single-digit growth rates we expected from the company in the pre- COVID. In fact, the company has since won significant levels of new business from government clients to which it was first exposed during COVID.

We believe the market does not like the positive long-term changes to Maximus’ business model. This created significant opportunities in the stock. Additionally, we believe there have been a variety of crosswinds which may have further distracted investors. We also believe that a group of investors stepped in at some point, for example towards the end of 2020, when it became clear that Maximus was only a short-term beneficiary of COVID-related work. These same investors likely exited the stock because the shorter-term work, the reason they bought the stock, began to decline a few quarters later.

Currently, we believe the market is obsessed with a data point regarding the company’s fiscal financial directions, particularly the company’s resumption of work in new Medicaid determinations. Before COVID, Medicaid reviews were an annual process in which the company determined whether citizens on the state’s Medicaid customer lists were still eligible for the program. When COVID hit, the federal government declared a public health emergency (PHE). One of the effects of this was to freeze Medicaid re-determinations while the PHE was in effect. At the same time, economic disruptions and other government emergency measures have placed even more citizens into Medicaid programs. So now states have much larger Medicaid enrollments, and they are unable to remove residents who are normally no longer eligible for Medicaid, as long as the federal government’s PHE remains in effect.

We estimate that Medicaid reviews represent a small, but not meaningless, portion of annual revenue and benefits. We note that the company’s guidance for fiscal year 2022 (first provided in November 2020) assumed that the PHE would be declared complete. Medicaid reviews would be allowed to resume, around the middle of their fiscal year — or thereabouts. It has been clear for a few months now that this will not happen. On the one hand, the federal government had promised state governors that they would receive 90 days’ notice before the end of the PHE. It didn’t happen in time. Moreover, with an important midterm election cycle approaching, we suspect there will be no political will to remove millions of voters from government health programs before November.

We therefore accept that this part of the Company’s expected profits for this financial year be delayed, but we do not consider this to be a change in the Company’s business model. We believe that once the timing of this part of their activity is resolved, the market will lose focus with this short-term data point and begin to notice the true trajectory of all activity.

In this regard, we emphasize that early evidence seems to confirm that the Company has emerged from the “COVID years” 2020-2021 with a significantly improved growth rate. As noted above, when the company provided its first guidance for fiscal year 2022, management estimated the underlying organic revenue growth rate at +18%, well above pre-COVID levels of the society. Once all the dust settles, we expect the rest of the market to take notice of the company’s improved business model. We not only expect the stock to return to its former valuation levels, but also to exceed them over time. We believe that even a moderate revaluation alone would be worth around +50% for the stock, with an added benefit of the company’s higher growth profile over time.

Editor’s note: The summary bullet points for this article were chosen by the Seeking Alpha editors.