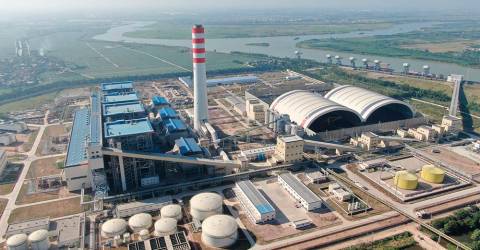 KUALA LUMPUR: JAKS Resources Bhd expects to see better financial performance for the year ending December 31, 2022 (FY2022), amid steady and recurring contributions from its power-energy division and as the business becomes more active in the field of energy.

The group, which is also actively involved in construction, expects earnings from its 30% stake in a coal-fired power plant in Vietnam to cushion the current weak construction outlook and the COVID-19 pandemic, it said. said its chief financial officer Lim Tiong. Jin.

The coal-fired power plant is JAKS’ first foray into power generation and other large-scale infrastructure projects as an independent power producer under a power purchase agreement with Vietnam Electricity, the country’s largest electricity company.

Lim said the profit share of the group’s 30% stake in the power plant was the biggest contributor to the group’s earnings at present.

The group expects the plant to generate a fixed future payment stream over the 25-year concession period, which started from the fourth quarter of 2020.

“For construction, we now have about RM240 million in order books, mainly for six local projects,” he told Bernama during a media visit to the power station in Vietnam recently.

For the year ended December 31, 2021, its total share of profits from the 30% stake in Hai Duong Power Plant was RM140.7 million. This led the company to turn around to make a pre-tax profit of RM30.3 million from a loss of RM110.2 million in the prior year.

Meanwhile, the group has the option of increasing its stake in the power plant to 40% from 30% currently.

“We are working to exercise that 10%. Hopefully if all goes well it will be this year,” Lim said.

In addition, the group is actively studying the possibility of investing and expanding its activities in foreign markets, particularly in Vietnam.

Lim said he is looking for opportunities to acquire existing power plants, solar power plants, water infrastructure projects and wastewater treatment plants in Vietnam that could make an immediate contribution to JAKS earnings.

“We have a lot of interesting projects in the works. If we could wrap that up, that would be great. There are also a lot of parties that come to us for possible collaborations,” he added.

JAKS maintains a healthy financial position with low leverage below 1.0. The low debt ratio gives the group the flexibility to increase its debts to finance any future accretive acquisition.

The coal-fired power plant bodes well for JAKS to venture into other energy offerings such as liquefied natural gas (LNG) as Vietnam seeks to wean off its reliance on carbon-intensive coal in line with regional trends which could potentially intensify competition. for fuel.

Energy demand in Vietnam is expected to increase from 265-278 TWh in 2020 to 572-632 terawatt hours (TWh) in 2030, along with increasing industrialization and economic modernization.

Lim said this represents a lot of opportunities for JAKS to venture into other renewable energy projects, especially in Vietnam.

Currently, the group is exploring potential acquisitions of renewable energy projects, including solar farms, hydroelectric dams and LNG facilities, in Malaysia and Vietnam.

At the same time, the group is also seeking to rebuild its order book for local works, relating to hydraulic, road and motorway infrastructures.

“Of course, we would like to develop this segment (power-energy pole), and we are now going more into renewable energies.

“In Malaysia, we are involved in the fourth cycle of the Large-Scale Solar Program (LSS4), and construction started at the end of March,” he said.

JAKS is among 10 companies selected for LSS4 projects last year, which analysts predict will deliver a mid to high single-digit internal rate of return for winners.

The group aims to reach commercial operation by the first quarter of 2023, which will provide JAKS with an additional stream of stable recurring revenue with a 21-year concession period, Lim said.