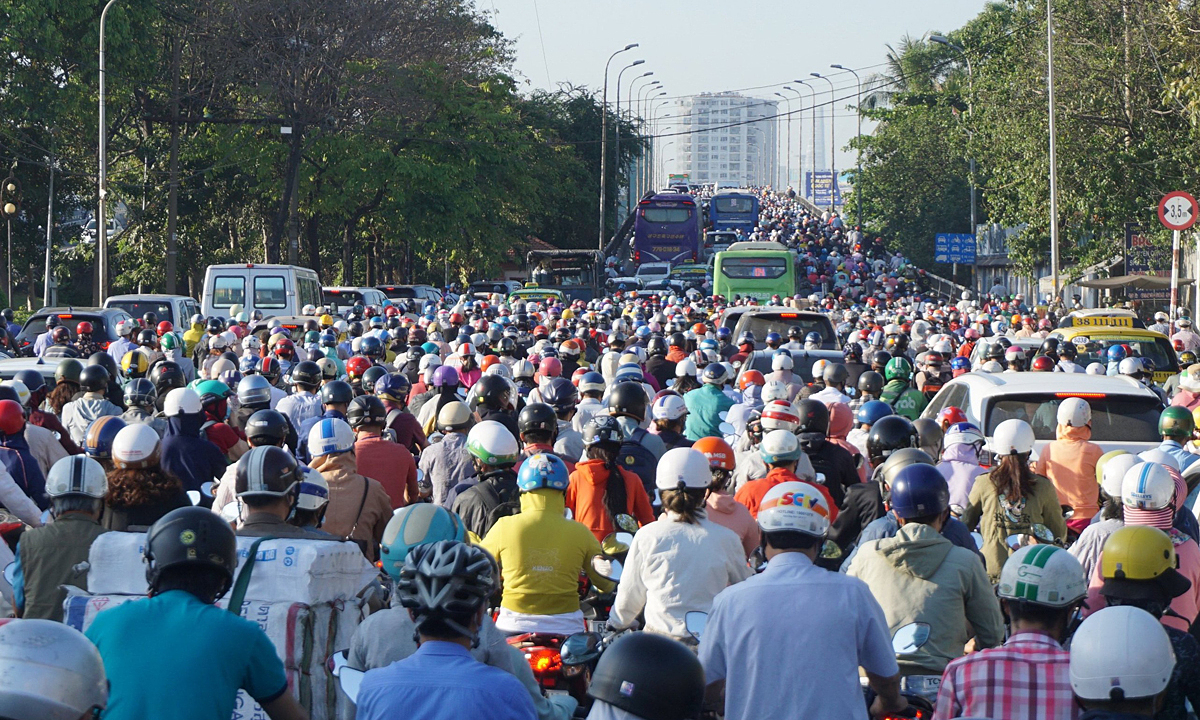 In the days leading up to and following the Lunar New Year holiday, which lasted nine days from January 29 to February 6, a section of the expressway that crosses Binh Thanh district and Thu Duc city experienced several resumption of traffic jams.

At one point, cars and buses got stuck in a traffic jam that stretched for 2km (1.24 miles) in Thu Duc as thousands of motorbikes tried to force their way through the crowds.

Apart from being the main road connecting the eastern part of the city to its center, the expressway also connects to Mien Dong bus station which carries passengers to and from localities to HCMC’s southeast neighbors and the northern and central regions. Given such a position, traffic jams are frequent on the route.

“Traffic jams mainly occur at the Binh Trieu intersection which is near the north-south railway line. Every time the train comes and goes, there are serious traffic jams,” said Van Quan, a driver from truck.

He said it often took him more than two hours to travel more than 20 km from Thu Dau Mot town in Binh Duong province to the center of HCMC due to traffic jams.

In Binh Duong province, the expressway has already been upgraded and widened to have eight lanes, but the HCMC section has four to six lanes.

The 5 km section of the expressway in Thu Duc city was constructed in 2001 under the build-operate-transfer (BOT) investment model. The investor was Civil Engineering Construction Corporation No.5 JSC (Cienco 5) of the Ministry of Construction.

However, the project could not be realized because a resolution issued by the Standing Committee of the National Assembly, the parliament of Vietnam, regulated that all projects made under the BOT format must be suspended and switched to use. of the state budget.

In 2019, CII submitted to the city a five-year investment plan (2019-2023) for a VND 10 trillion project to upgrade the section of National Road 13 through the city of Thu Duc. However, the project remains on paper.

The extension of National Highway 13 is “essential” given the increased traffic on the road, said Tran Chi Trung, head of the planning and investment office of HCMC’s transportation department.

The department has already formulated a plan to modernize the section during 2021-2015, but capital remained its biggest hurdle, he added.

He said the center had approved HCMV to spend VND142 trillion ($6.28 billion) from the state budget for its medium-term public investment plan for the period 2021-2025, but that this sum is not enough for the city to include upgrading the freeway section.

“The city has proposed to the central government to extend the allocation with an additional VND 119 trillion. Once this is approved, the city will have more investment funds to cover the upgrade works of National Road 13” , Trung said.

The city said it plans to spend VND 1.5 trillion this year to upgrade sections of national highways 13 and 50, the latter a route linking HCMC to the Mekong Delta that has been degraded and usually suffers from traffic jams.