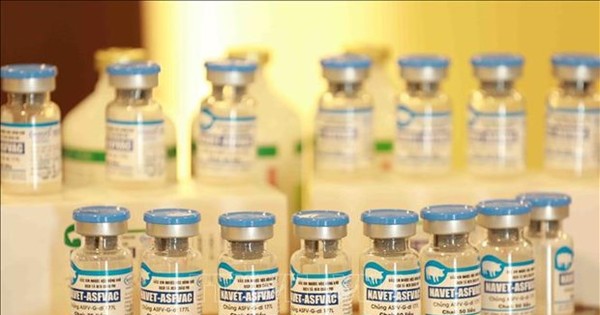 Tien said the success raised the prestige of Vietnamese animal husbandry and veterinary medicine in the world. More than 50% of farms in Vietnam are small-scale, so vaccines are essential to protect the industry, which drives the middle class. It is also a chance for Vietnam to export vaccines to other countries, he said, adding that many countries have contacted the ministry and expressed interest in the new developments.

The successful production of the African swine fever vaccine as well as other veterinary treatments reveals Vietnam’s ever-growing capacity in veterinary medicine, he said.

With the production of NAVET-ASFVAC, a product of Navetco National Veterinary Joint Stock Company, Vietnam has become the first country to develop a commercial African swine fever vaccine that provides 6 months of immunity and meets the technical requirements of the industry.

The vaccine was developed from a genetically modified strain of the virus by deleting the previously uncharacterized I177L gene.

Tien said the ministry will closely supervise the pilot injection of 600,000 doses of the vaccine before allowing its use nationwide.

Former Minister of Agriculture and Rural Development Nguyen Xuan Cuong said vaccination will be a key measure to ensure the food chain, while paving the way for Vietnam to successfully implement the development strategy of breeding during the period 2021-2030 with a vision for 2045.

African swine fever is a contagious and fatal viral disease affecting pigs of all ages. The disease was first detected in Vietnam in February 2019. In seven months, it spread to all 63 cities and provinces of the country, causing the country to kill around 6 million pigs, or 20% of the pig herd. total. Total losses from the debacle were estimated at VND30 trillion ($1.29 billion).