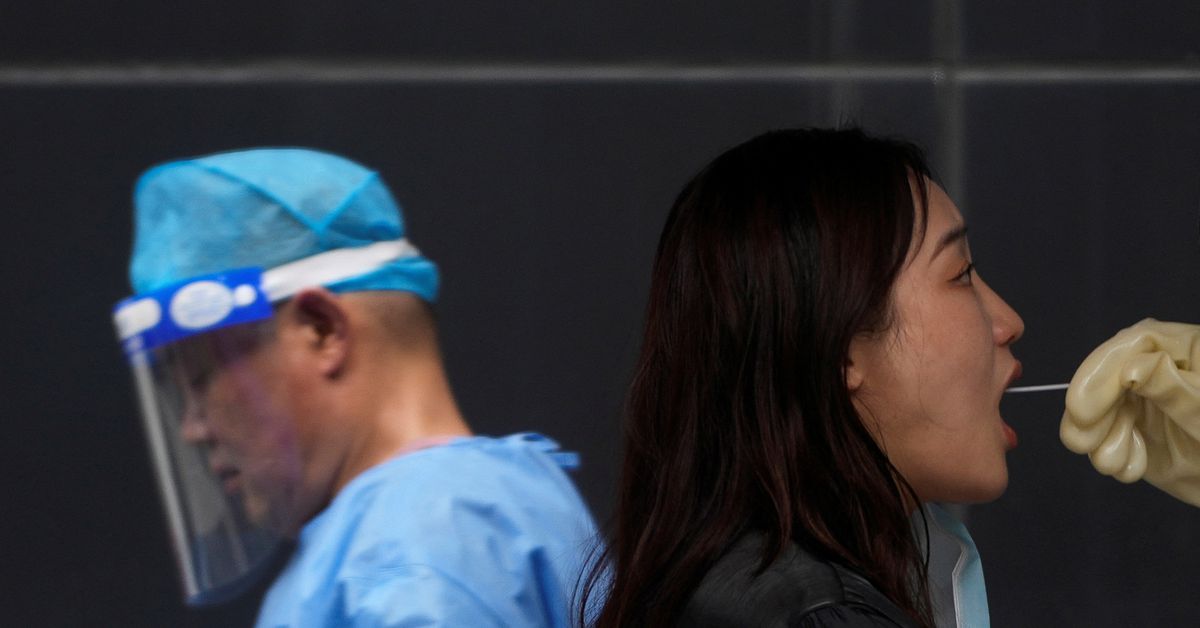 A woman gets tested for COVID-19 on a street amid new lockdown measures in parts of the city to curb the coronavirus disease (COVID-19) outbreak in Shanghai, China, July 11, 2022 REUTERS/Aly Song – RC2H9V9IKSJD

HONG KONG, Sept 2 (Reuters Breakingviews) – Covid testing is playing an outsized role in Chinese life: just ask anyone in Sichuan’s provincial capital, Chengdu. Officials trying to comply with President Xi Jinping’s mandate to eradicate the SARS-CoV-2 virus within the country’s borders are locking down the city of 21 million and subjecting residents to free but mandatory testing every 24 hours. A nightmare for residents, it means more sales for local businesses supplying kits and mobile labs to government buyers.

From the start of the pandemic through April 2022, the Chinese government said nearly 12 billion tests had been carried out, and that figure may have doubled since then, according to estimates from Soochow Securities. That’s skyrocketing sales at companies like $3.7 billion Daan Gene (002030.SZ), where profits jumped 130% in the first half. Dian Diagnostics (300244.SZ), earned 1.9 billion yuan ($275 million) from performing 150 million tests in 30 provinces during the same period. The net profit margins of the 17 listed companies analyzed by Breakingviews averaged 24%.

Given the stress that Xi’s Covid-zero policy has applied to other parts of the economy, their stocks have unsurprisingly outperformed. Wuhan-based Easy Diagnosis (002932.SZ) has grown 264% over the past three years, while Daan has grown 197%. But growing competition, price caps and late payments have caused many shareholders to start taking profits, and much of the sector is underperforming the benchmark CSI300; Guangzhou Kingmed Diagnostics (603882.SS) is down 40% year-to-date.

This reflects policy changes. The number of test kit vendors authorized by regulators has risen from seven at the start of 2020 to more than 30 in 2021, with hundreds of smaller companies vying for additional licenses. This lowers public spending. In Shanghai and some other cities, authorities now refuse to pay more than 28 yuan per kit, whereas they once paid around 200 yuan.

Getting paid also becomes an issue. Fiscal strains, a byproduct of a widespread real estate correction and generally depressed business activity thanks to traveling closings, appear to be pushing some municipalities to delay payments. Shanghai Labway Clinical Laboratory (301060.SZ), for example, reported a 189% year-over-year increase in accounts receivable in the first half. The lag could get worse given that Beijing recently banned governments from dipping into their medical insurance funds to buy tests.

There is no indication that Xi will soften his no-tolerance approach to Covid, which means continuous and constant testing. But the days of easy profits may be over for good.

(The author is a Reuters Breakingviews columnist. The views expressed are her own.)

The Chinese city of Chengdu announced a lockdown for its 21.2 million people on September 1 as it launched four days of citywide Covid-19 testing.

Other major cities, including Shenzhen in the south and Dalian in the northeast, have also tightened Covid restrictions this week, ranging from work-from-home requirements to the closure of entertainment businesses in some major districts, it said. reported Reuters on September 1.

The opinions expressed are those of the author. They do not reflect the views of Reuters News, which is committed to integrity, independence and freedom from bias by principles of trust.

Beijing, analyzing economic data, interviewing high-level officials and traveling to remote provinces to visit factories and talk to local traders. Prior to that, she spent nearly three years in Santiago, Chile, where she created a business news website for the agricultural products industry – and developed Spanish as a third language alongside Mandarin Chinese and from English.

Why ExxonMobil shares are rising today