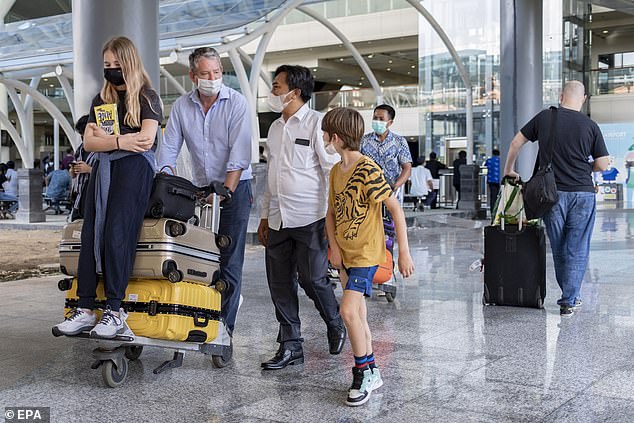 Currently, anyone wishing to enter must prove they tested negative within three days of their flight to Australia.

But as the nation continues its transition to life with Covid, the government wants to remove the burden to help encourage tourists to visit.

Mr Morrison did not say exactly when the tests will be scrapped, but revealed: ‘It will be an important step. It’s not too far from us now.

The Prime Minister made the comments in Cairns when announcing a $60 million tourism package to bring international visitors back to areas hardest hit by international border closures.

Australia welcomed overseas travelers again for the first time in two years last month after the federal government locked down the country on March 20, 2020.

The tourism sector has been hit hard by border closures, forcing many businesses to close.

“As the world reopens and travelers get out and see the world again, we want to make sure Australia is at the top of the must-see list,” the Prime Minister said.

“I have listened to tourism industry operators on what they will need to rebuild their international tourism businesses and this increase in funding will meet those needs.”

He said the package was to get people on planes and get them here.

“The return of our international tourism market will support hundreds of thousands of tourism jobs, strengthen our economy and support our world-class tourism operators and the many regions that rely on international visitors, such as tropical North Queensland.”

Scott Morrison said the package was to get people on planes and get them here.

“Since the full reopening of our international borders, Tourism Australia has promoted Australia at Work through a $40 million international marketing campaign,” Mr Tehan said.

“This campaign is just the start of a long-term strategy to revive tourism in Australia, with further investment in international tourism marketing campaigns coming in the second half of the year. “

“Our government is working with the sector on a long-term strategy to grow the value of the visitor economy to $230 billion by 2030.”

WHERE THE MONEY GOES:

○ $25 million for direct partnership activities enabling TA to work with commercial wholesalers, airlines and media to bring international demand back to key regions; and